Our Model-driven media delivery platform is a fully integrated platform for multimedia content adaptation and delivery. Its basic design is inspired by the principles of XML-driven content adaptation techniques, while its final design and the implementation thereof are based on Semantic Web technologies such as the Resource Description Framework (RDF), Web Ontology Language (OWL), and SPARQL Protocol And RDF Query Language (SPARQL).

Because the platform is fully based on Semantic Web technologies (see above), advanced queries can be constructed by a client application and efficiently processed by the platform. This way, fully customized search applications can be developed to interact with the platform while searching for media content. Because media resources can be annotated down to the scene level, it is possible to only return the relevant media fragments that correspond to the search query (instead of the full media resource).

The most important features of our media delivery platform are:

Current multimedia landscape is characterized by

In order to deal with the current multimedia landscape characteristics, efficient techniques for multimedia content adaptation and delivery are desired:

A tight coupling exists between the design of the media delivery platform and a model for describing structural, content, and scalability information of multimedia bitstreams. This model, implemented by making use of OWL, provides support for a seamless integration of the adaptation operations and semantic metadata. Therefore, it enables the definition of adaptation operations on a higher level (i.e., based on the model). Furthermore, when existing coding formats are mapped to this model, they can be adapted in a format-independent way.

Within our platform, support for the authoring and retrieval of multimedia is provided, together with the ability to adapt and deliver the multimedia content in a format-independent way. Clients can request media content through RTSP, RTMP, and HTTP. Before media content becomes available through the platform, this media needs to be ingested. Information regarding multimedia content can be obtained via a SPARQL endpoint. Requested content is selected, adapted, and packaged using format-independent adaptation and packaging engines and delivered to the client by making use of the RTP/RTSP streaming service, the RTMP streaming service, or the HTTP download service. A high-level overview of the architecture of the NinSuna platform is also depicted in Figure 1. 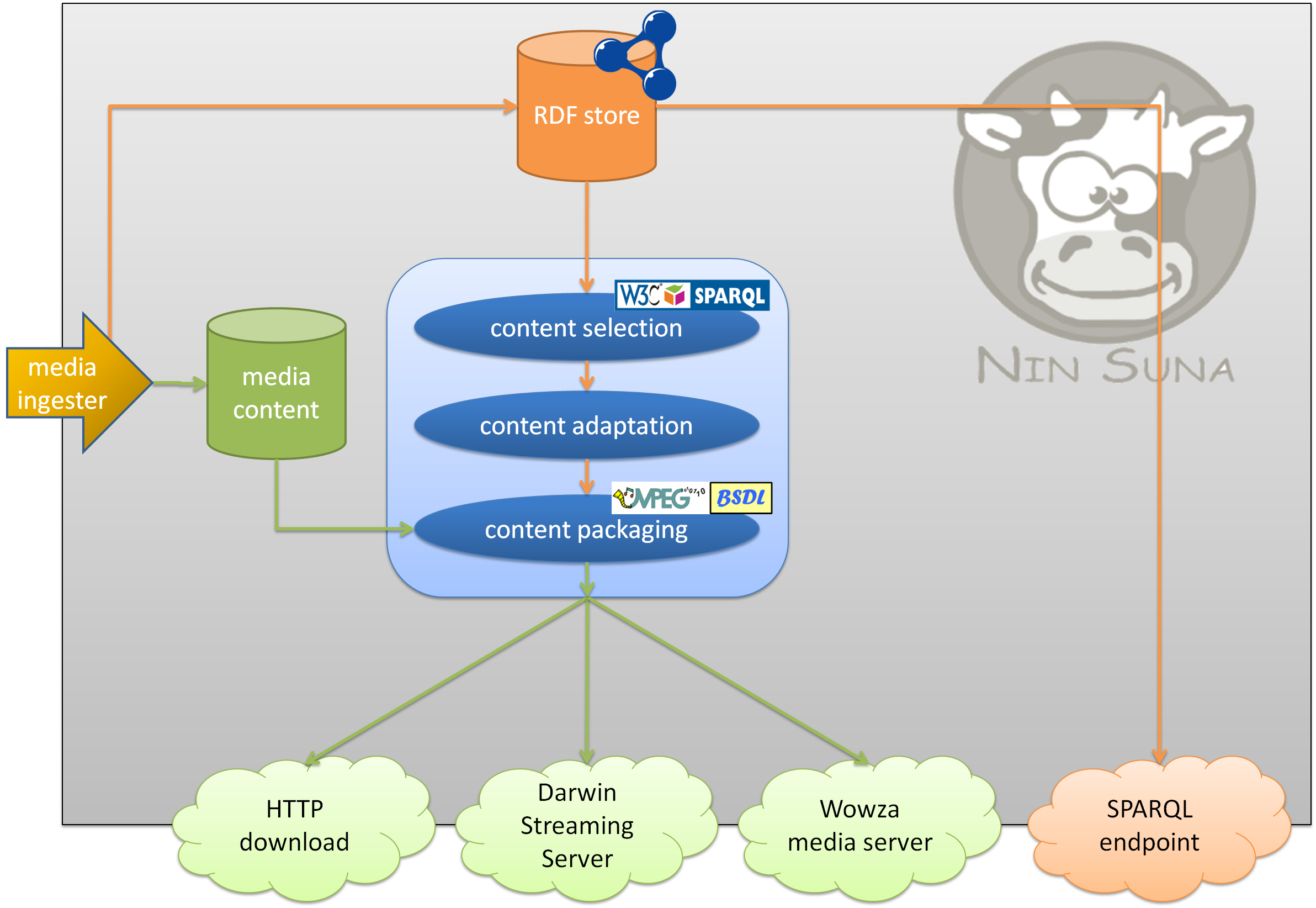 Our media delivery platform is called ‘NinSuna’, which stands for “The NinSuna INtelligent Search framework for UNiversal media Access”. Note the origin of the term ‘NinSuna’: A minor Sumerian goddess noted for her wisdom, and whose house was in Erech (Uruk). She is the wife of the deified king Lugulbanda and mother of the great hero Gilgamesh. In the Gilgamesh epic she appears as a counselor of her son and interprets dreams. Her name means “queen of the wild cow” (Encyclopedia Mythica).